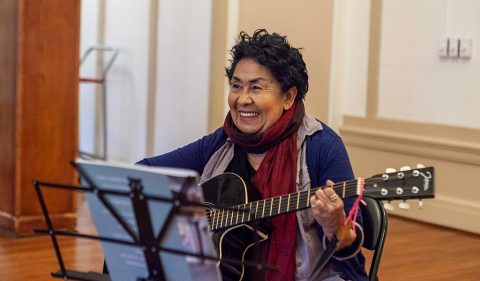 Metta Fund may sound like an offshoot of the tech giant formerly known as Facebook, but this San Francisco-based and -focused foundation is not a product of Silicon Valley. Rather, it takes its name from the Sanskrit word for loving kindness, and was created from the assets of a two-hospital merger in 1998. Metta Fund traces its roots to the city’s mid-19th-century German Benevolent Society. After more than a century of addressing health disparities and other needs, it turned its attention to serving older adults in 2016, making a 10-year commitment to the cause.

Despite its relatively small size, Metta Fund is at the forefront of some of the hottest topics in aging and philanthropy. These include reframing aging from a deficits-based model to something more positive, practicing trust-based and community-led giving, and applying a racial equity lens to all of its work. As such, it’s a great example of a smallish foundation making a big impact in a specific arena by taking a strategic approach.

If you log onto Metta Fund’s website, you see a video of smiling older folks dancing together in an ultra-modern, swooping-walled senior center. Actor and activist Danny Glover, a San Fran native, talks about the importance of community and recognizing that lessons from the past can guide our future. A client of the senior center, located in the historically Black neighborhood of Bayview-Hunters Point, says, “It feels great. It just feels great.”

These are not the images or attitudes widely associated with aging, but they are an example of Metta Fund’s participation in the national “reframing aging” movement, an effort to change the narrative around growing old. Reframing aging proponents take the position that creating public will for better policies for older adults requires, among other things, combating ageism in language.

Guidance from the Reframing Aging Initiative includes focusing on momentum that comes with age, and using the first-person plural — “we” rather than “they.” This might mean saying, “When we age, we often slow down,” instead of “Man, those old people sure move slow!”

Metta Fund incorporates this more positive, realistic language about aging — and the thinking behind it — into its grantmaking. “We have sought to frame our work, not just in what’s missing, but what could be present,” says Metta Fund CEO Janet Y. Spears. “Instead of focusing on social isolation and loneliness, focusing on social connectedness. Asking, ‘How can we support connectedness?’ and letting that question guide who we choose to support.”

The reframing aging movement also shows up in Metta Fund’s investment in communications. Spears hired Metta Fund’s first-ever communications director, Anna Karrer Manley, in 2018. Karrer Manley hired a photographer/writer to interview clients of grantee organizations and create photo-led stories about them. These stories currently live on the fund’s website, and some photos are hung in Metta Fund’s office. The original intention was to host a photography exhibition, and while that plan was shelved by COVID, a future exhibition is in the works.

“We have in our society ingrained ageist views,” she says. “We don’t want to talk about aging. We want to be ‘anti-aging.’ We don’t take care of our elders in respectful ways. If you look at Shutterstock and type in ‘older person,’ or ‘senior,’ you see a person with a rounded back, and a walking stick. We want to tell stories to counter those dark views of aging, and at the same time, bring to life real stories of older adults and the issues they’re facing. Storytelling plays a huge role in our intent to impact narrative change.”

Under Spears’ leadership, Metta Fund has also focused on practicing community-led, trust-based giving. This means, among other things, having board members who range in age from their mid-30s to mid-80s, convening conversations with community members and grant partners, and giving multiyear, general-operating grants that allow grantees to make their own decisions.

“It’s being led by community rather than philanthropy. Looking at the communities we serve and letting them guide where dollars will be most helpful,” says Spears. “We have a set of grant partners who we believe and listen to in order to guide the direction of our grantmaking.”

Metta Fund decided to focus on social connection as a key grantmaking area in response to the community’s stated concerns. “This was not post-COVID or because that’s what AARP said. It’s what the community of San Francisco said they need,” says Spears.

Metta Fund’s website lays out some stark stats: Nearly a third of San Franciscans 65 and older live alone today, with 7% spending only an hour a week socializing. Social isolation and loneliness have been linked to a slew of poor health outcomes and are often cited as risk factors up there with smoking. As we’ve written before, less than 2% of philanthropy goes to traditional aging-related organizations. Bayview Senior Services, whose Dr. George W. Davis Senior Center is pictured in the previously mentioned video, is a core grantee in this area. The center offers classes, meals, parties and a place for the 120 mostly Black senior residents and nonresident community members to come together.

Being community-led also means looking at whether potential grantees include older adults in their decision-making. “Is there a council? Is there a feedback mechanism? It’s about engaging the voice of the older adults in the programs,” says Renee Espinoza, Metta Fund’s director of program strategy.

Because the foundation is located in the area it serves, staff members can see firsthand how projects are progressing and provide wraparound services to support their work. This has allowed the fund to offer older folks in San Francisco far more tailored, high-impact services than they’d otherwise receive, says Spears. The foundation further leverages its role as a place-based funder by connecting grantee organizations to each other in an effort to spur collaboration and have more impact.

“Sometimes, place-based funders are very focused on delivering services — more meals, or more programs. Metta Fund does that, but they also think very much about systems, about how a system is operating and could be built or changed to become more equitable,” says Kevin Prindiville, executive director of the nonprofit Justice in Aging, a Metta Fund grantee.

Justice in Aging is a somewhat atypical grantee of Metta Fund because it focuses on policy issues and advocates for changes that may need to happen at the state or federal level. Metta Fund not only understands the importance of these larger policy initiatives for San Franciscans, says Prindiville, but also has connected the nonprofit to relevant, city-based organizations, such as housing providers. “This has helped us make sure there is a match between policy initiatives we advance and the real need on the ground,” he says. “They’re incredibly thoughtful and strategic. That’s pretty rare and has been a wonderful support for us and a catalyst for other funders to think in that same way.”

Spears has led the effort to make equity a prime concern of Metta Fund, applying an equity lens to internal and external practices. Taking an intersectional approach for Metta Fund means focusing funding in areas with a dearth of services and with organizations targeting hard-to-reach individuals and communities that have been otherwise left out.

“You may be an older person and a woman of color and also identify as queer. Each one of these identities can contribute to inequities or mean you’ve experienced inequities in your life and the system can’t provide as needed,” says Karrer Manley. “Not everyone is able to experience golden years due to inequities that are exacerbated later in life. We have a special focus on BIPOC elders, who may not enjoy retirement like others might.”

Spears sees future funding continuing to focus on underserved populations within the community of older San Franciscans. “I think we’re at a really good point right now and have many things moving forward as we integrate racial equity into everything we do.”